The promise of a sunny day encouraged us to adventure further from home again. Well weather promises are certainly meant to be broken but more about that in a bit. I did some internet searches for places to hike with waterfalls and came across a park that had a waterfall but also another interesting feature. Ringing Rocks Park, the name will give you a hint about the other feature, looked like a destination adventure. I only told Steve that we were going to a park and needed to bring a hammer. We plugged the coordinates in to GPS in the morning, as the post I had read said that was the best way to find this off the beaten path park. The original estimate was 1.5 hours, which didn’t seem too bad as were other places we could visit in the area and / or on the way back. Well, the estimate seemed not to take into account not only traffic and traffic lights but also the fact that the GPS seemed to enjoy changing the route frequently. I wasn’t paying as much attention to where it was actually taking us as my eyes were drawn to the very cloudy sky which would occasionally start sending rain down on the sunny day we anticipated. I imagined us getting there and not being able to actually visit the Park at all. Fortunately, when we finally made our way to the destination the rain was absent at first and there were a lot of people in the parking lot. After we confirmed that other people actually brought hammers as well, we grabbed ours from the car and headed to the rock field.  You can read all the science behind ringing rocks in several places, here is one. 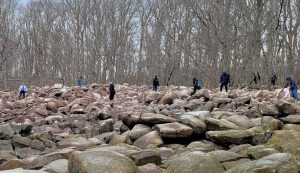 It was easy to tell where to get the best sounds from the rocks as you can see they are worn away in the places where they have been hit repeatedly. 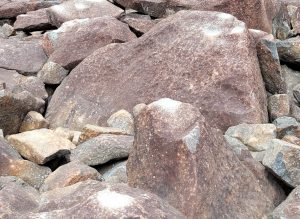 I wished our son was with us as he would recognize the different musical notes, but alas he is doing his own adventuring in Ireland.  After playing on the rocks for a while we were going to go in search of the waterfall and it began to sleet, did I mention that the prediction was for 50 degrees and sunny all day?  We went back to the car to return the hammer, have a drink and a snack and wait it out for a bit.

Sure enough after about 20 minutes the sun was back out and we were out on the trails again.  The main trail is about a .9 mile loop, which is much shorter then we usually walk. There is a longer trail that goes out to the Delaware Canal and back, but besides the weather conditions I was glad we stuck to the shorter route.  It seems that the waterfall is not always falling when the weather has been dry but when the weather has been wet, like lately, the trail is full of mud.  We were able to avoid the worst of it stepping on rocks and logs.  The terrain was already uneven and there were a lot of changes in elevation, so this park is not for anyone who has balance or other mobility issues. Maybe they could get to the edge of the rock field, but not out among the rocks or to the waterfall, certainly not around the full loop.

Having enjoyed the park we decided to head back along the Delaware River on the New Jersey side.  This route was much nicer then the way we had come up through Philadelphia and onto the Turnpike.  We passed through Frenchtown and a few other nice little spots.  We stopped when we got to Lambertville that had an interesting restaurant to check out for dinner and a place with vegan ice cream for dessert.  The weather was holding, so we strolled around looking in the shop windows, the weather wasn’t nice enough that we wanted to venture walking across the bridge to New Hope but we have done this before.

The dinner at El Tule was a fusion of Mexican and Peruvian.  We tried a number of things and brought left overs home for the next day.  First this was our first time doing anything but take out or picnics since the Pandemic started.  They had a lovely outdoor seating area with heaters, well spaced tables and umbrellas, which, yes they had to put up at our table when the rain made a short comeback during our dinner.  We had Ceviche, one of our favorites, for which they offered several options.  We had vegetable empanadas, guacamole and chips and some really tasty vegan tacos, with a really good mix of marinated vegetables.  I would go back for the tacos alone, they were not the average mushrooms and peppers.  Packing up the leftovers allowed saving just enough room for dessert.  The ice cream place Owowcow had two flavors currently that were vegan, a dark chocolate and the other was called “rain”.  It was described as a marshmallow blueberry concoction that sounded awful but actually was really tasty.

Heading home we hoped that the weather would soon be more temperate and predictable allowing for many more lovely adventuring days.